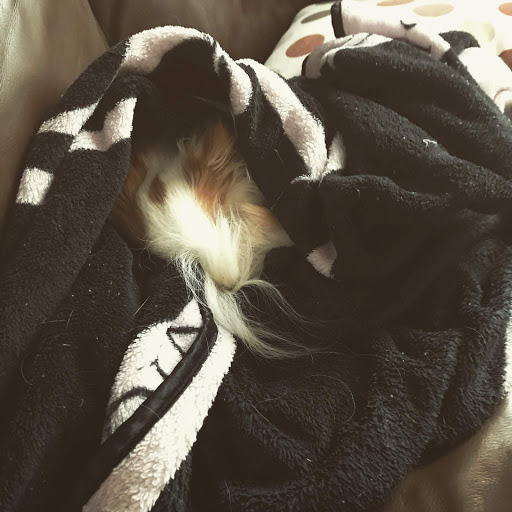 
I don't have much exciting to report. Since a couple of weeks ago when I rescued Katai's buddy the baby horse and was ecstatic to see that Katai's abscess had burst I haven't been able to make it to the barn much because of poorly timed snow and illness.

I'd be real grouchy about it except this is the first time in a long time where I've missed this much and I've been making progress packing up our apartment. While Katai was injured I'd also brought home all my tack and got it cleaned so we haven't been completely devoid of progress over here, just mostly devoid of progress :)

Katai was an absolute brat when I have been out but I'm blaming the fact that she's been getting more grain to ensure she was eating her bute and ulcer meds as well as the fact that she'd been on an alfalfa bale when she was on paddock rest and hadn't been moving around much and wearing off energy. Plus, inconsistent magnesium. Now that she's sound again I'm planning to do quite a bit of lunging before I get back on.

The rest of this winter, my focus is on fitness for both of us and weight loss for me. I've joined some rider fitness Facebook groups and I'm working on tracking my diet again. I'm also giving up alcohol for the next month or two to cut down on those superfluous calories. It is a tough time of year to try to lose weight and gain fitness but for the next few weeks at least we have the apartment gym and we only have one more Christmas gathering.

I did get some great Christmas gifts this year though and thought I'd share those in this post. First, what I got for myself.

In continuing the theme of getting myself horsie Christmas stuff I got a few things with the gift card I received back when I got the clipper. I had decided to wait and use it on Black Friday to make my money go a little further and there were some good deals that I was able to take advantage of.


I picked up a nice tack cleaning sponge, some raspberry breeches that were on clearance, and (my favorite) the grey set of Eskadron bandage liners. I ADORE these bandage liners and already have a black set and a white set but when I saw Dover had the grey set I decided to pick those up as well. In addition, I got them monogrammed because I'm that person. I think they're cute (plus the monogram won't be seen when they're on her so it's not too over the top) and can't wait to use them!


Then, yesterday, we were at my boyfriend's mom's for Christmas. She Christmas shops off lists so this year I sent her a Riding Warehouse list. It's awesome because that list reflects size, color etc so all she needed to do was add the stuff she wanted to get me to the cart. Even better, I'd put a bunch of stuff on the list in all different prices so she could mix and match what she wanted to get that was in her budget and it was a surprise still what I got.

She picked out a purple braiding comb/clip that I'm excited to try out as well as the Haas lambswool brush (which was backordered so isn't here yet), Dreamers and Schemers socks in a winter/holiday pattern, and the Back on Track scarf. I'm excited about all of it but especially the scarf because I have very tight and painful shoulders and neck (which turns out is likely because of anxiety) and someone at the barn recommended this since I can wrap it around whichever body part needs some help. I wore it the rest of the evening and it made my neck feel so weird but also better.


I've also been doing some bargain/thrift shopping! First, I've been stalking a used Horswear Ireland group on Facebook and was able to score another neck for $25.

Then, I noticed someone selling a ton of breeches on Facebook for $30 each, all nice name brands. I picked out two that I thought were cute. They're larger sizes than I normally wear, which currently fit me, but I figured that once I lose the rest of this weight I could always find them a new home. They arrived this morning and they are AWESOME. They clearly haven't been worn and one still had a price tag for $140 on it. Pretty awesome score!
Finally, only partially horse related, I ordered some work clothes on ThredUp. The reason I'm mentioning it here is that they're part of my quest to both figure out how to be appropriately dressed for work while not needing to bring an entire outfit to change into at the barn (since I go directly there from work) and to look more like an adult in my day to day life. I tend to rely a lot on sweatpants, hoodies, and other ill fitting clothes but it's more out of laziness than anything else. Doing this through a thrift store allows me to get brands that I otherwise wouldn't be able to afford and to not feel too bad if some of this stuff gets wrecked eventually at the barn. I'll try and report back!