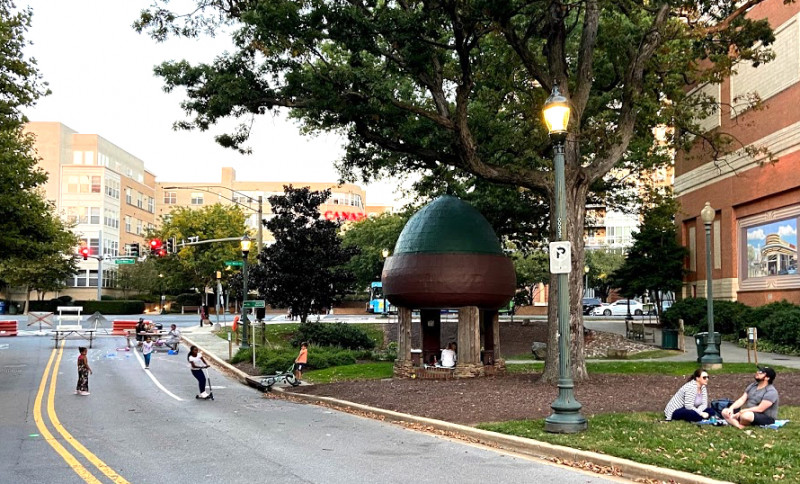 Newell Street in Silver Spring is closed to cars — but for how long?

In September, Montgomery County got its first “playstreet” when the Montgomery County Department of Transportation (MCDOT) closed down one block of Newell Street, and effectively doubled the size of a small park near Silver Spring’s Metro station. Now, residents who have loved riding bikes, eating picnics, and walking their dogs in the expanded open space are afraid it may be taken away.

Almost immediately after it opened, kids could be found riding scooters and bikes, playing pick-up soccer, and climbing the park’s trees. Some parents drew hopscotch boards in the former turn lanes. After the Parks’ department placed picnic tables along the asphalt, people populated them quickly.

The park is a Picnic in the Parks location, and people can get take-out delivered from local restaurants, and are even allowed to get alcoholic drinks with their meals. Many of the condos and apartments nearby allow pets, so for some it meant that a street that had once been an uninspiring cut-through became an ideal dog destination.

But after some complained that the road closure was forcing them to drive an additional one and a half blocks to reach East West Highway, MCDOT announced that it would be conducting a survey to assess support for continued closure of Newell. Residents have until October 18 to send an email expressing their opinion either way.

The shut-down of Newell came after several residents requested more space for recreation in one of the most crowded neighborhoods in the county, South Silver Spring. Playstreets are formed when underused or unused street space is designated as closed to cars and open to people for all kinds of recreation.

Unlike a “shared street” or “slow street”, a “playstreet” is completely closed, and no cars are allowed for the duration. In some cities, playstreets are used to create playgrounds near urban school buildings during the middle of the day. Playstreets are also used for special events like children’s bike races or festivals in non-COVID times.

South Silver Spring is flanked to the north by the offices of the National Oceanic and Atmospheric Administration, to the east by Georgia Avenue, to the west by 16th Street and to the south by the DC boundary line. There are not many larger parks close by, and for those living in the high rises closest to the Metro, there are virtually no public playgrounds within short walking distance.

“East West Highway is effectively our Main Street,” said Paul Meyer, one of the residents who asked for the street closure this summer. As main streets go, it’s hectic. Although the number of cars has dropped significantly since COVID began, traffic in the large, four-lane artery often moves faster now because drivers have fewer obstacles.

Newell is a quiet side street off of East West Highway that flanks a small wedge of land called Acorn Park. The park is probably best known for having a giant, antique gazebo in the shape of an upturned acorn. It is also the site of the mica-laden spring that gave the city its name. There are also some murals painted on a nearby building that were commissioned by the now-defunct Caldor Company.

“Now that we are at home all day taking care of our kids and trying to work at the same time, things have gotten tough,” Meyer said. He and another local resident, David Fogel, say they have often seen kids trying to make play spaces in the nearby plazas and parking lots, often dodging between incoming cars to ride bikes or play tag. There’s not much open space or playground space anywhere else between high-rises.

“The Pearl put in play equipment, and people play there, but it isn’t very big and it isn’t very clear if it is open to the public,” Fogel said, referring to one of the newest residential buildings in the neighborhood about a block away. The Pearl’s modest jungle gym often gets too crowded to be safe for social distancing purposes at the Pearl, he added. “This area has been underserved for parks and lots of other things for a long time.”

In addition to living here, Fogel is the owner/operator of the Bump-N-Grind coffeeshop located just a block away. Like Meyer, he is a parent of young kids. He has been advocating for the street to be closed for years and was excited in May of 2019 when the county Planning Board considered a proposal to improve the park facility. Ultimately, the Board rejected their staff’s designs, asking for revisions that might bring down costs. Plans were underway to address the Board’s feedback but were slowed due to COVID.

In the meantime, like many neighborhoods, those who live nearby are often sheltering in place to avoid the virus while simultaneously homeschooling their children or simply watching them all day while most daycare centers remain closed.

To the northeast, there is the Jesup Blair Park. Getting to that one, however, involves crossing two major, multi-lane, busy roads run by State Highway, Georgia Avenue and East West Highway. Once you get to the other side where the park lies, it is still a long hike to get to the playground, Fogel points out.

For Meyer, options are additionally limited because he and his wife do not own a car.

Both Meyer and Fogel were extremely excited when the road closed to cars on September 25, noting that the playstreet both expanded their recreation options and made a large, chaotic, three-way intersection between Newell, East West Highway and Blair Mill Road safer and less confusing for pedestrians, cyclists and drivers. They hope the closure will continue.

County planners have also noted that the area is undergoing study as part of the downtown master plan revision. The planning department is currently holding listening sessions online and taking surveys about what people think is missing in the community, including park space and transportation. Master plans are only revised once every two or three decades, and so getting things like permanent new parks or safer streets often depends upon inclusion in the documents and long-term plans.

“If people have thoughts about what is needed, they can tell us,” said Leslye Howerton, who is lead on the Silver Spring Downtown and Adjacent Communities plan for the Maryland-National Capital Parks and Planning Commission. “We want to hear what people experience in this place.”

Newell Street in Silver Spring is closed to cars — but for how long?