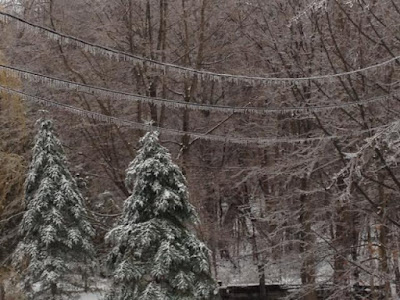 Weekend Storm Still Looking Dangerous For Vermont, Many Other Parts Of Nation

It looks like I'll want to do daily updates on the approaching potentially dangerous storm this weekend here in Vermont. At least until it hits.

The storm is a forecasting nightmare and will continue to be even when it is in progress Saturday and Sunday, so expect surprises.  Not all of the surprises will be pleasant, for sure.

At this point, if forecasts go amazingly close to accurate, some flooding is a good possibility across a good chunk of Vermont, given the rather heavy rain and snow melt that will come with the storm.

The highest potential for damaging freezing rain and ice accumulations are in the northern and maybe central Champlain Valley and parts of the Northeast Kingdom. Sections of northern New York and southern Quebec are also under the gun with this scenario.

The first piece of this storm will rocket from around Kansas to the Great Lakes today and tonight, driving a warm front through Vermont.

After today's chilly weather, you'll notice temperatures going up overnight tonight. In the Champlain Valley, you'll really notice the wind pick up, with gusts to at least 45 mph in spots later tonight and tomorrow morning.

Meanwhile the main storm will start to gather around Texas. That's why there's a severe weather outbreak scheduled for Friday and Saturday in the Deep South.

The storm is transporting huge amounts of moisture and heat northward in the eastern third of the nation, which will produce that heavy rain in the Tennessee and Ohio valleys, and the record warmth along the East Coast.

A band of freezing rain and sleet will travel along the northern and western periphery of the storm.  That's where Vermont's troubles come into play.

Cold high pressure is stll expected to establish itself in Ontario and Quebec. That would push a cold front down into northern New England, including northern Vermont.

What comes from the sky, then, during the storm will depend upon where this weather front gets stuck, or wavers back and forth. If forecasters are off on its position by as little as 10 or 20 miles, then the weather forecast for the storm will be wrong.

The reality check is, forecasts are almost alway off by a dozen or two doze  miles with the location and speed of a cold or warm front no matter what the situation.  Usually this margin of error has little effect on weather forecasts and the predictions end up being accurate.

I doubt it this time. That's because, first of all, the temperature contrast across the front will be tremendous.  I can see a scenario in which its 30 degrees in St. Albans and 60 degrees in Rutland during parts of the storm.

On top of that, this is shallow, low level cold air coming in from the north. Temperatures aloft will remain very balmy.  It's possible in northern Vermont we could get temperatures in the upper 40s on the summits of the Green Mountains while freezing rain coats trees and power lines in the valleys.

If current forecasts are to be believed, the cold air would begin bleeding into the Champlain Valley, some spots in the Northeast Kingdom and northern New York Saturday afternoon or evening.

We don't know how far south the front will get, and whether it will lift back across the International Border during the height of the storm.

If the front stays draped across southern or central Vermont, the northern Champlain Valley and other northern locations could easily see the worst ice storm since the epic one in 1998.  Although, looking at the bright side, there seems to be no way this one would be as bad as 1998.

I have seen in some of these situations that the cold air from Quebec can bleed south along valley floors as far south as Rutland, so we'll have to keep an eye on that.

On the other hand, if southerly winds win out, the temperature would stay or go back above freezing Saturday night all the way to the Canadian border. That would be nice in that we'll escape the worst of the damaging ice.

By the same token, that warm air north would put all of Vermont in play for the risk of flooding. Heavy rain mixed with temperatures in the 50s to around 60 melts snow pretty quickly too.

The heaviest rain or ice or even possibly sleet or snow in the far north would come down Saturday night and early Sunday morning. It would taper off pretty quickly on Sunday afternoon as the storm heads away from us.

Stay tuned on this one.  It's certainly shaping up to be the first really nasty storm of 2020.

Weekend Storm Still Looking Dangerous For Vermont, Many Other Parts Of Nation