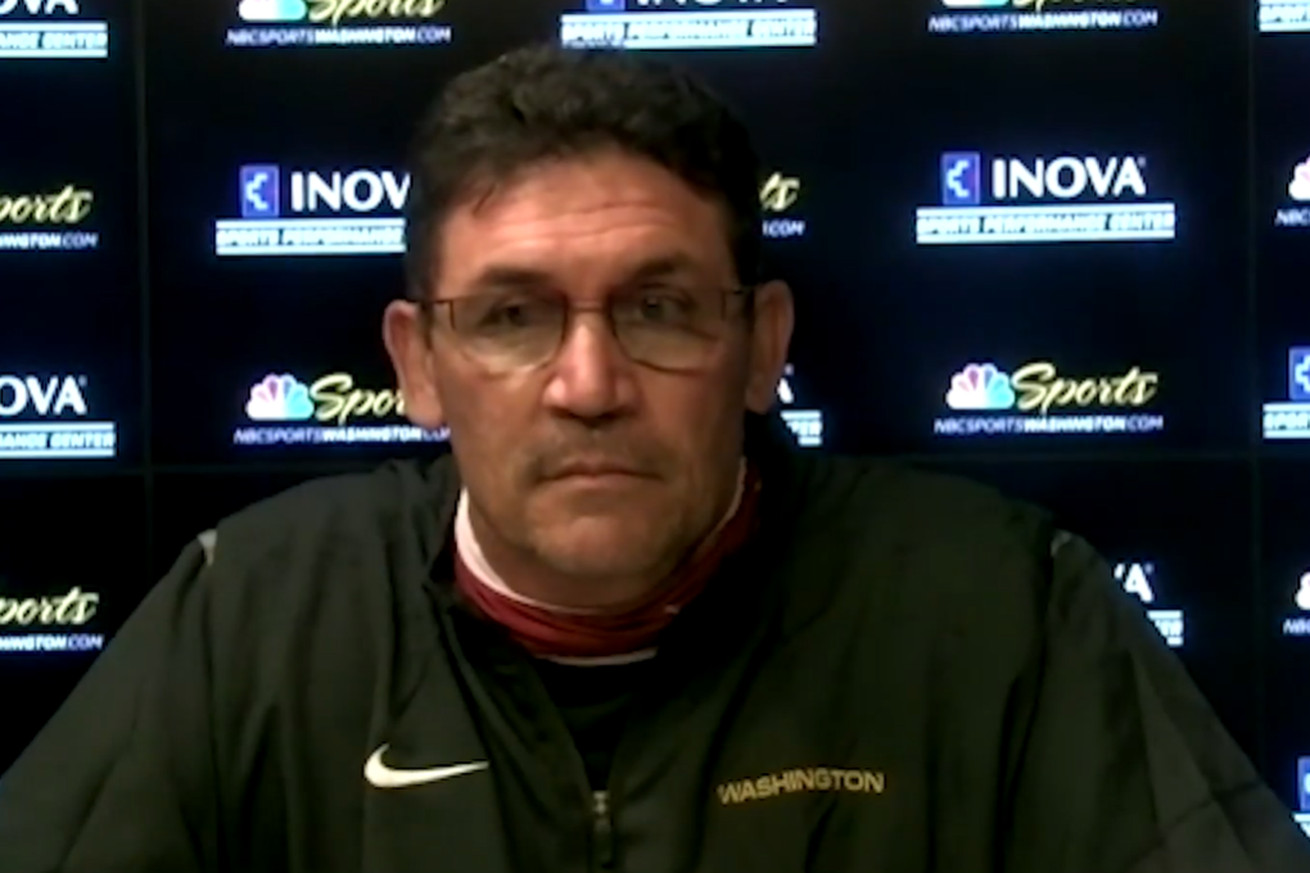 Ron Rivera Presser: Learned the importance of position flexibility as a coordinator

Ron Rivera will travel with the team tomorrow when they go to Cleveland to face the Browns on Sunday. He traveled on Dan Snyder’s private plan last week when the team traveled to Arizona. Rivera is undergoing cancer treatments, and said this week is a shorter trip for him to make. Travel restrictions on teams have also left Team President Jason Wright and Vice President of Player Personnel Kyle Smith back in the DMV for away games.

Rivera loves some of the changed rules for teams due to COVID-19 this year. He said having 80 players in training camp instead of the normal 90 allowed for more intimate coaching. This year’s short-term injured reserve option is something he would like to see the NFL keep long-term. He mentioned someone like Brandon Scherff who has an MCL sprain that is projected to keep him off the field for 3-6 weeks. The team would have two options in the old system, keep him on the roster and inactive until he’s healthy, or put him on IR and keep him out half the season.

Everyone else is good to go, including CB Kendall Fuller and LB Thomas Davis Sr. Neither have played yet this season.

Injury report: Saadhiq Charles, Cole Holcomb are both out; Steven Sims, Morgan Moses are questionable.... From the injury list today: Ryan Anderson, Thomas Davis, Ryan Kerrigan, Moses and Sims all were full participants. (note: If not on the list, it's a good sign of course...)

Last week Rivera flew to and from Arizona privately and separately from the team, due to his cancer and ongoing treatment, but with Cleveland being a shorter trip he said he's traveling with the team this weekend.

Because of Covid, Washington has cut down on how many travel to road games. Ron Rivera said team prez Jason Wright and VP of player personnel Kyle Smith aren't traveling...

Head Coach Ron Rivera spoke to the media about the importance of position flexibility.

Rivera said he first learned about the importance of position flexibility as a coordinator. Said there were multiple occasions where players went down with injuries and someone was able to step in.

Rivera said he liked only having 80 players at training camp this year compared to 90 usually. Allowed for more intimate coaching.

Rivera would also "love to keep" the short-term IR (said Scherff is a great example) and being able to pull players off practice squad temporarily.

In talking about why he favors the current short-term IR rules, Ron Rivera mentions Brandon Scherff as an example, saying, "Instead of him sitting there for four weeks or five weeks..." Don't want to speculate, but that could be telling re: Wash's expected timeline for him.

Ron Rivera on Alex Smith: "I wouldn't have any trepidation about making him active. Now it's just a matter of opportunity."

Rivera on if QB Alex Smith would be ready to start if necessary: "I think he's almost at that point."

Mentioned that Smith does not look like a player coming back from a devastating injury.

Rivera admits that Kyler Murray "kind of froze" the defense. The unit waited for him to do something instead of attacking.

Washington LBs Coach Steve Russ also talked to the media today, and he mentioned a popular theme of the Ron RivERA, diversity. Linebackers in the modern era have to have a diverse skillset, and can’t just be fast and powerful. Some teams still play “big-boy football” so you need defenders to contain those offenses.

Kevin Pierre-Louis is getting the opportunity to be a full-time starter for the first time in his career and he is taking advantage of it. He continues to improve and was one of Washington’s studs last week. Cole Holcomb has been injured the last two weeks, but Russ isn’t worried about him falling behind because he stays mentally engaged. Jon Bostic is a leader on the defense and is on pace for his best season rushing the passer. He has already recorded 2 sacks, and has never had more than 2.5 in a season. Russ attributes his success to Bostic’s effort and Washington’s defensive line.

Russ mentioned how LBs nowadays need to have a diverse skillset. "Can't just be fast and not powerful."

Added there are teams in this league that still play "big-boy football," so there needs to be defenders to contain those offenses.

Russ said that LB Kevin Pierre-Louis is continuing to improve as a full-time starter for the first time in his career. KPL has played at least 90% of the snaps the first two games and leads the team with 20 total tackles.

Russ said there have not been many surprises with the linebacker group. Surprises tend to stem from preconceived notions, Russ said, and the group did not have many of those entering 2020. More about meeting standards.

Asked LB coach Steve Russ whether there's concern Holcomb's progress as a second-year pro could be stunted by an early-season injury. Russ said he feels that'll only happen to a player who doesn't stay mentally engaged, and Holcomb does an excellent job at staying engaged. https://t.co/nJlyyKQAeW

Russ said most teams have one linebacker that's basically out there all the time because that player has the helmet mic. For @WashingtonNFL, that's Jon Bostic. He's played every defensive snap through two games.

Linebackers Coach Steve Russ spoke to the media about what he expects to see from the Browns' offense.

My pick for this year’s Mason/Brennan Preseason Hype! Awards Kamren Curl got a chance to answer questions today. Being a late round(7th) pick was extra motivation to make plays in training camp. Going in the last round is almost like going undrafted, and you need to prove yourself every day. Curl was consistently noticed by reporters and coaches in camp, and has played the 6th most snaps by a defensive back for Washington over the first two games.

Is Kamren Curl a 7th round ?

Curl said Odell Beckham Jr. and Jarvis Landry have good hands and are deep threats. Part of the emphasis will be making sure they don't beat over the top to prevent big plays.

Curl has been trying to stay hydrated and getting massages after practice in order to stay ready for games. It's part of the effort to take care of his body.

Ron Rivera Presser: Learned the importance of position flexibility as a coordinator