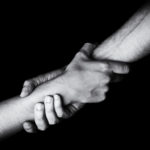 People Tend To Do Right By Each Other

In our highly combustible times, it can appear a very dog-eat-dog world, in which many of us are purely out for ourselves.  New research from Ohio State University suggests this is an unduly cynical outlook, and in fact, most people want to help one another, even if doing so costs them something.

“We wanted to do an exhaustive study to see what the effects of those motivations would be when combined – because they are combined in the real world, where people are making choices about how generous or kind to be with one another,” the researchers explain.

The research recruited several hundred volunteers to try and explore quite what prompts prosocial behavior, and whether it is, in fact, more common than we perhaps previously thought.

“Prosocial behavior means doing something for someone else at a cost to yourself,” the researchers say. “So one example would be paying for the person behind you’s order at the coffee shop. Or right now, wearing your mask in public. It’s a cost to you; it’s uncomfortable. But you contribute to the public good by wearing it and not spreading the virus.”

Previous research had identified four main motivators behind the way we behave, especially in terms of behaviors that benefit others:

Previously, each of these motivators had been studied in isolation, but of course, in the real world, these things are generally not isolated, but rubbing up against one another.

“In the real world, the conditions under which people are nice to each other are not isolated – people are embedded in their networks, and they’re going about their daily lives and coming into contact with things that will affect their decisions,” the researchers explain. “And these experiments show that all the motivations work. If you want to maximize prosocial behavior, it was a really great thing to see.”

The study asked volunteers to give a proportion of an endowment to other people.  The researchers created four distinct scenarios to reflect each of the possible motivators identified above.  They hypothesized that the four motivators might actually crowd one another out.

The researchers suggest that most of us have a degree of self-bias, in which we’re more likely to weight something done to us than something we see done to others.  Nonetheless, the results showed that all four of the motivators still showed up as predictors of our willingness to give to others, and this was regardless of how the motivators were combined.

It’s a finding that they believe helps us to better understand the rich diversity of prosocial behavior we’re capable of, and that it might be more prevalent than we previously thought.

“From an evolutionary perspective, it’s kind of perplexing that it even exists, because you’re decreasing your own fitness on behalf of others,” they conclude. “And yet, we see it in bees and ants, and humans and throughout all of nature.”

People Tend To Do Right By Each Other