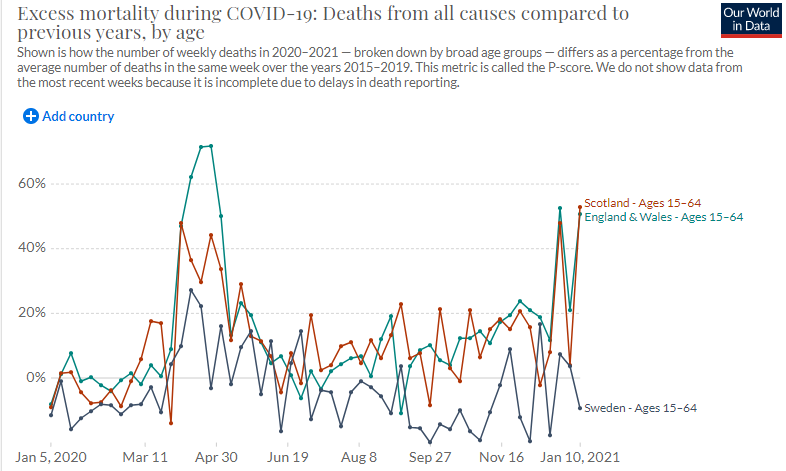 THE pointlessness of our government’s panic-stricken response to Covid-19 is well illustrated in this graph, which broadly covers working-age populations. It compares Sweden’s death rates with those of England, Wales and Scotland.

As a number of previous TCW articles have pointed out, Sweden has kept its economy going with its people gainfully employed, rather than in enforced idleness – as has so often been the case here. It hasn’t forced businesses to shut down by law.

Prime Minister Stefan Löfven, who leads a coalition government, has held his nerve despite death threats to Dr Anders Tegnell, the state epidemiologist whose advice he chose to follow. Both have also had to contend with pressure from some lockdown-minded scientific advisers.

So England’s cowardly, feckless, naive and popularity-focused government, like those in Wales and Scotland, has contrived to squander several hundred million pounds of your and my money, whilst not even managing to save as many lives as Sweden has.

Why don’t Andrew Marr, Robert Peston and Sophie Ridge et al put up graphs like this on their screens and then ask Government ministers to justify their lockdown policy? (This one can be easily created via this link).

In fact, you wonder whether any of these journalists are ever going to confront a minister with such a graph – they’ve had months on end of opportunities.

Their failure to do so is especially unforgivable since the Government and its scientific advisers happily make use of their own favoured charts and diagrams on a regular basis.

The post Lockdown Britain is proving deadlier than ‘free’ Sweden appeared first on The Conservative Woman.