[mashshare]
Take two college athletes, one who lifts year-round and the other who takes six months off—who has the competitive edge?

Obviously, the athlete who trains continuously will be in better shape. Knowing this, why do many sprint coaches neglect to give their athletes workouts during their short academic breaks? Further, what types of workouts should athletes perform on their own, especially when they lack training facilities?

First, we’re not talking about summer training. Most sprint coaches will give their athletes some direction about what to do during this longer break. I’m focusing here on extended periods when athletes are away from school during the academic year. Do the math: spring break can steal up to 10 days of training, winter break may consume up to a month, and there are often several shorter holiday breaks such as Thanksgiving. When added up over a four-year athletic career, these interruptions can represent 4-6 months of downtime.

Although most athletes probably won’t let themselves go like Thor did in Endgame, if they don’t perform some type of resistance training during these breaks they may lose strength, power, endurance, and even speed. The good news is that it doesn’t take much work for an athlete to at least maintain their athletic fitness during these stretches away from the program—and, possibly, they can even slightly increase it.

[bctt tweet="The good news is that it doesn’t take much work for an athlete to at least maintain their athletic fitness during these stretches away from the program, says @GabrielMvumvure."]

A 2011 study found that “performing 1 weekly strength maintenance session during the first 12 weeks of the in-season allowed professional soccer players to maintain the improved strength, sprint, and jump performance achieved during a preceding 10-week preparatory period.” However, another group in the study that trained only once every two weeks not only lost leg strength, but also saw increases in their 40-meter sprint times.

Other studies have found that as long as the intensity was high, strength (and even aerobic fitness) could be maintained for as long as three months by reducing the training volume by two-thirds! Translated into a practical example, it’s possible that getting in just one 30-minute workout during spring break may be enough to have an athlete start back where they left off. However, with careful and creative planning, it’s possible to get athletes in better shape than when they left. During the school year, I give my athletes detailed weight training programs designed to improve sprint performance that include cleans, deadlifts, squats, and chin-ups. I can also work with the athletic training department and our strength coaches to provide them corrective exercises to address muscle imbalances that may increase the risk of injury.

If an athlete has flat (i.e.,valgus) feet that may cause injuries such as shin splints, they could be given corrective exercises that create lateral tension on the foot to help reform the arch. If an athlete has a history of hamstring pulls, we might give them specific hamstring, glute, and subumbilical abdominal (i.e., below the belly button) exercises to address muscular imbalances that may be the underlying cause of this injury. But when an athlete is on a school break and doesn’t have a world-class gym and support staff as we do at Brown, you are faced with the dilemma of “optimal training versus reality.”

[bctt tweet="When an athlete is on a school break and doesn’t have a world-class gym and support staff, you are faced with optimal training vs reality, says @GabrielMvumvure."]

When an athlete is on break, it is often difficult for them to find a gym that has platforms and power racks that will enable them to continue the workout they performed at school. However, even the lamest of commercial gyms will have dumbbells. Further, some athletes have these dumbbells at home, or are willing to purchase them.

Please understand that what I’m saying is not just theory—I performed such training programs while competing for LSU, and have given my sprinters these types of workouts to use on breaks. Before providing examples, I would like to share with you the following five practical guidelines for home training:

If athletes must train in a colder environment, they should spend more time warming up to enable them to train harder and avoid injuries. In contrast, if they are training in an extremely warm environment, they need to dress lightly and have plenty of fluids nearby to hydrate properly. Regarding exercise selection, there are many ways to challenge the muscles without barbells. Consider chin-ups and push-ups, for example—if these are too easy, there are more challenging variations (such as wide-grip chin-ups and one-arm push-ups). Many movements can also be performed isometrically (hey, remember the classic Charles Atlas “Dynamic-Tension” Course?). Figure 1 offers a few examples of different modes for home training. 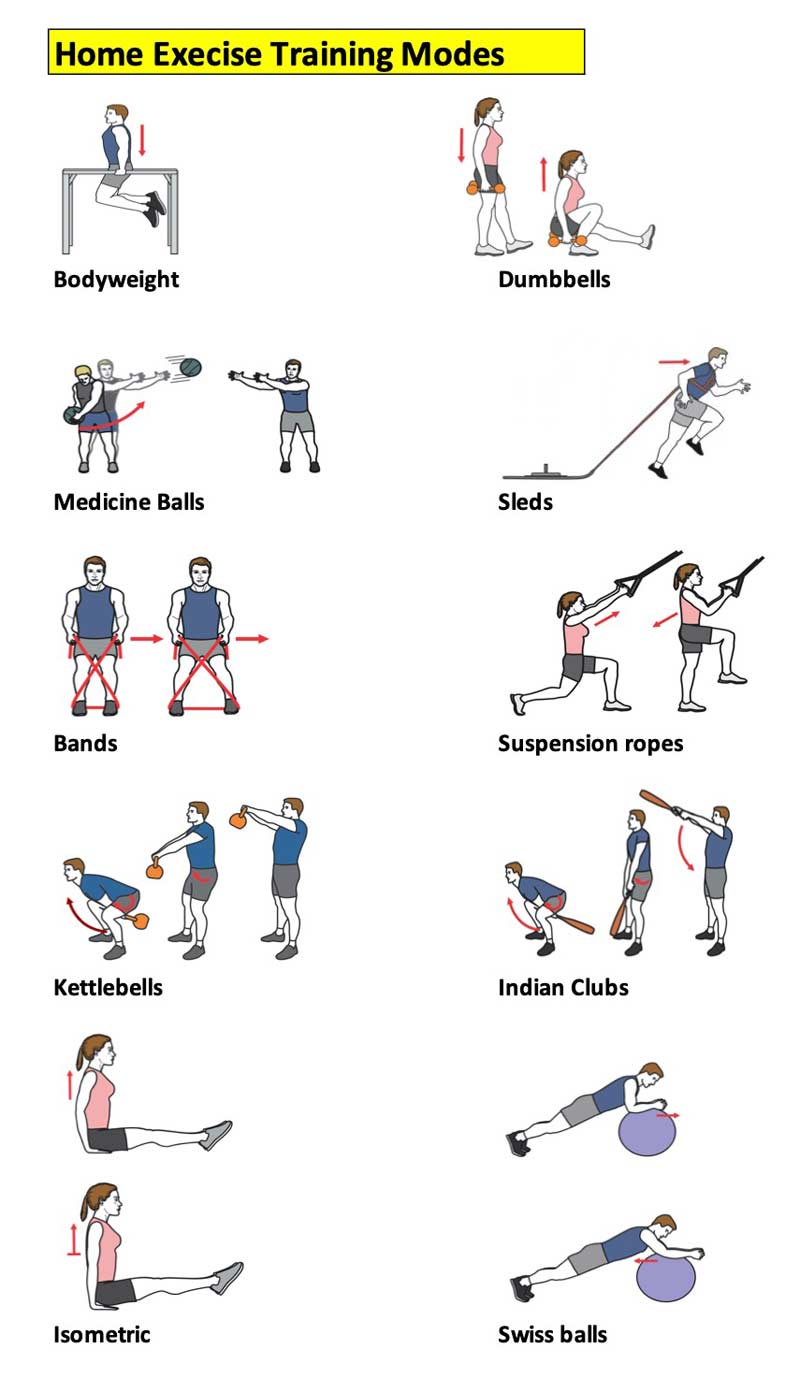 Unless the athlete has access to a commercial gym, most likely the only exercise modes that will be available will be bodyweight, isometric, and possibly bands and a few light dumbbells. Regarding dumbbells, the athlete can save a lot of money by purchasing adjustable dumbbell handles that allow for a variety of weight selections. Kettlebells are fine, but consider that these are usually fixed weights, and purchasing several pods can be quite pricey—besides, pretty much any exercise you can do with a kettlebell you can do with a dumbbell. Yes, swinging movements are more comfortable with a kettlebell, but you can certainly do swings with a dumbbell.

Workouts with a Purpose

Having reviewed a few of the tools at an athlete’s disposal during school breaks, I would suggest two types of workouts.

First, many athletes come out of high school programs with a history of chronic injuries. Often, during team training, the focus is on exercises that will directly improve performance (such as exercises that include explosive movements like cleans or strength movements like deadlifts). This approach leaves little time to perform corrective exercises that focus on preventing past injuries from recurring or doing pre-hab work that addresses muscle groups at a high risk of injury (for example, hamstrings with sprinters). School breaks are an ideal time to focus on such exercises—of course, athletes should consult with their school athletic trainers and strength coaches on these workouts.

At LSU, I had to opportunity to work with sports medicine guru Dr. Michael Ripley, both as an athlete and later as a coach. He did wonders to keep me healthy so I could train hard and eventually compete at the international level. Figure 2 shows one type of pre-hab workout Dr. Ripley recommends for athletes who have SI joint problems, often common in hurdlers. The second type of workout is designed to improve performance and address an athlete’s weaknesses. Let me give you an example of one such workout I would give to my sprinters. It was designed on Excel, dragging and dropping in the exercises into a spreadsheet that was converted into a PDF file. The focus of the workout was on leg and core strength, and the only implement required were dumbbells.

This workout can be performed in a station manner (one exercise at a time), or to save time (and increase muscular endurance), performed in a circuit. Two-to-three sets of each exercise are prescribed. Although not shown here, I will give each athlete suggestions on what weights to use (usually, I just give the starting weight, and then allow the athlete to select their own). Also, don’t rely on drawings or videos to ensure the exercises are performed correctly—have the athlete perform the workout at least once before they leave for break. That said, we’re working on a video exercise bank athletes can access to review optimal performance of exercises. 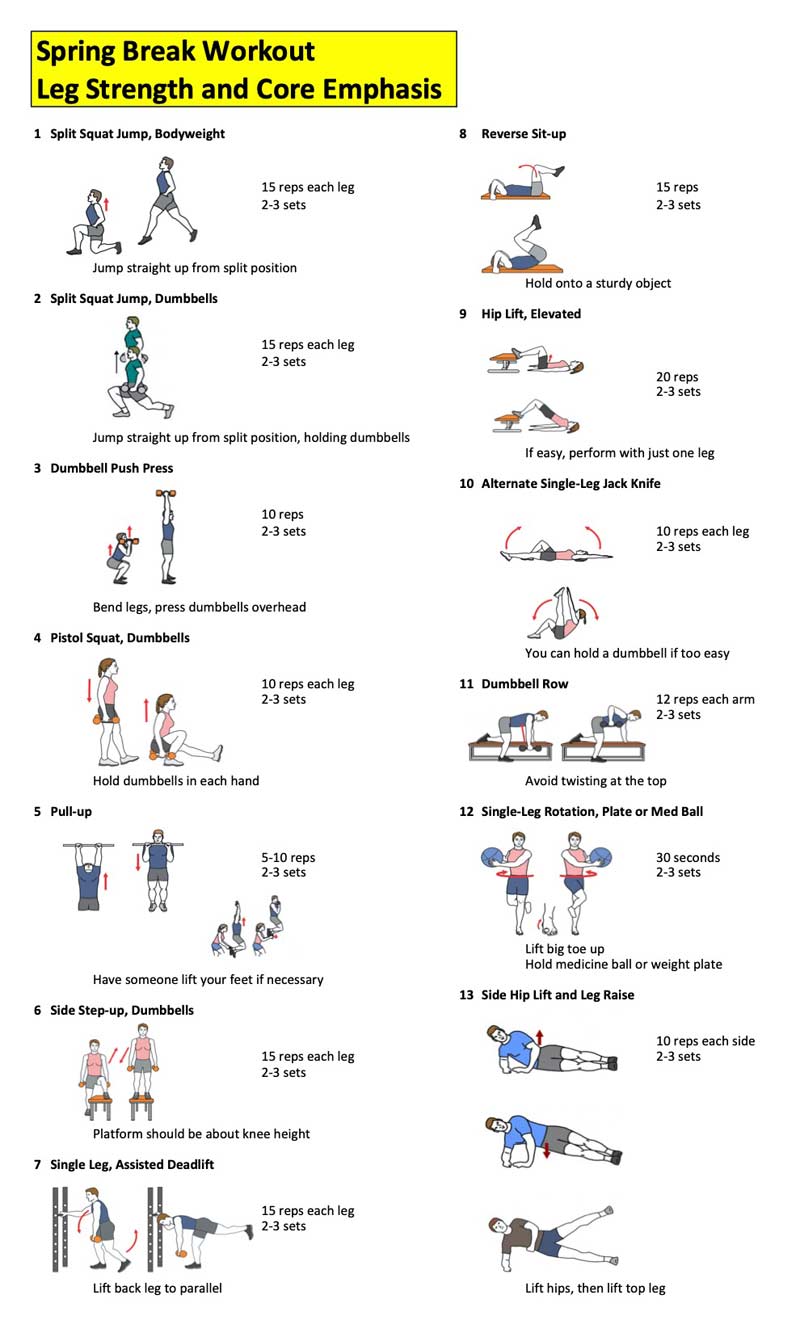 Figure 3. Spring break workout with an emphasis on improving leg and core strength (all drawings by Sylvain Lemaire, www.physigraphe.com).[/caption]

The next workout (Figure 4) is designed to help athletes who have had issues with overuse knee injuries or knee stability, which can affect running efficiency and cause hamstring injuries. Because there are several factors associated with these conditions, the workout includes exercises for the glutes, calves, and abdominals. This last workout (Figure 5) is designed to improve power and muscular endurance, and requires an investment in at least one medicine ball. Muscular endurance is often important for new athletes or athletes coming off of an injury, and power is crucial for athletes who need to work on explosiveness. Don’t get hung up on the exact exercises shown—coaches should use whatever exercises (or other loading parameters) they believe will best help each athlete achieve their goals. And for convenience, the coach should have several pre-made workout templates, each with a different emphasis and strength level. For my athletes, I start by making a version of each workout for men (heavier starting weights) and women (lighter starting weights).

[bctt tweet="For convenience, the coach should have several pre-made workout templates, each with a different emphasis and strength level, says @GabrielMvumvure."]

The 2019-2020 indoor season was my first at Brown University. Despite it being cut short by the coronavirus, my sprinters collectively established 32 personal bests, had 12 performances that ranked in the top 10 in school history, and broke two school records, including a 29-year-old record in the 4x400m women’s relay. I believe that part of this success was addressing all the variables that can contribute to performance. One of these variables is having a continuous, year-round weight training program that keeps my athletes strong, from the start of the season to the finish!

This article was edited for publication by Kim Goss, a former strength coach for the U.S. Air Force Academy who has a master’s degree in human movement.

The post Home Training for Sprinters: A Practical Guide appeared first on SimpliFaster.