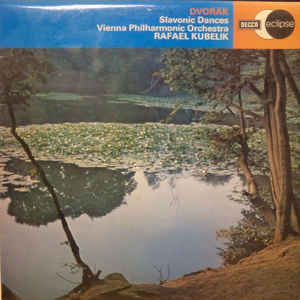 I heard Anton Dvorak’s Slavonic Dance, op.72, no.1 on Classic FM the other day. It brought back memories of the first time I heard these pieces on record. In the early 1970s, I invested a lot of my weekly pay packet in Decca Eclipse records. For the uninitiated, these were re-releases of Decca’s back catalogue, remastered to have ‘pseudo-stereo.’ This was an electronic reprocessed sound created from the original mono recording. Its integrity has been debated.
For me, one attraction of these albums was the typically (but see below!) wonderful photographs of the British Landscape by courtesy of the National Trust. So, I invested £0.99p in Raphael Kubelik’s 1955 recording of the Slavonic Dances where he conducts the great Vienna Philharmonic Orchestra.  (ECS 708)
There are 16 Slavonic Dancespublished in two volumes, op.46 and op.72. They were composed in 1878 and 1886. These Dances were originally written for four hand piano duet. Dvorak’s then publisher, Simrock, had suggested to him that he emulate Brahms’s Hungarian Dances, with a series of his own. These were the first pieces that brought huge popularity to the composer-both at home and abroad. Simrock further asked that they be orchestrated. In 1886, by popular demand, Dvorak produced a second series.  Musically, the first set, op.46 is Czech in character, and includes dances from Bohemia such as the ‘Furiant’ and the ‘Polka’. For the second group, op.72, Dvorak widened his geographical horizons and included a thoughtful Ukrainian ‘Dumka’ and a Polish ‘Mazurka’. Dvorak did not use pre-existing folk-tunes but absorbed their characteristic rhythmic and melodic features to produce his own original dances. They are very much idealised pieces.
The original LP of Kubelik and the Vienna Philharmonic had been issued in November 1955 on LXT 5079-80. At that date it was almost impossible to get 65 minutes onto a single disc. So, the dances were split between two LPs with a bonus track of Tchaikovsky’s Fantasy: Romeo and Juliet added. It was issued at the phenomenal cost of 72/11d. At today’s prices that would have been around £68!
T.H. (Trevor Harvey) began his review of this LP (The Gramophone, November 1955) by remarking on Kubelik’s ‘brisk speeds for many of the dances’. This was not deemed a problem except in the very first. He felt that ‘excitement was gained at a considerable loss of charm.’ Having listened to this ‘Dance’ in several versions I agree with Harvey’s comment from 65 years ago.  The same issue applied to the ‘enchanting canonic dance’ no.7 from op.72, although in this case Harvey thinks that this ‘speed’ works. Although the reviewer felt that the recording was good, it did not ‘emphasise the warmth of the Vienna strings.’ Subsequent remastering’s for the CD and digital age have done much to iron out this concern. 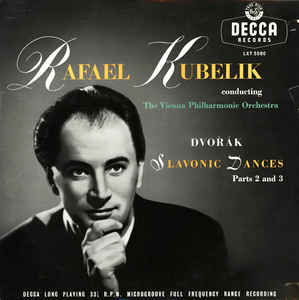 Nearly twenty years later, T.H. (Trevor Harvey) reviewed the Decca Eclipse re-release (The Gramophone, April 1974) and begun by reminded listener that a recently released album by Czech Philharmonic Orchestra conducted by Karel Šejna on Supraphon (MS01505) had managed to get all the Slavonic Dances onto a single disc. Although believing Kubelik’s ‘performances are as authentic and attractive as Sejna’s’ he considered that ‘the sound is nothing like as good, though judged on its own for electronic stereo from a mono issue it isn’t actually bad.’ Finally admitting that the Supraphon LP cost £1.60, he thought that it was ‘well worth the original money.’
Alas in those days, cost was the important thing, so it was the Decca Eclipse version for me.
The cover photograph was a huge disappointment to me. Compared to some of the wonderful, powerful landscapes of the Vaughan Williams’s Symphonies, recently released the rather prosaic picture of lilies in a pond seemed rather tame. In fact, the cover did not actually state where the lake was. 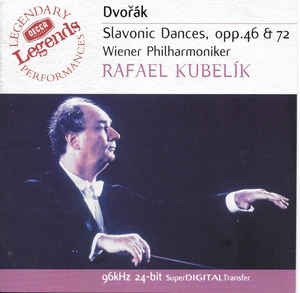 In 1975 Rafael Kubelik made another recording of Dvorak’s Slavonic Dances, this time with the Bavarian Radio Symphony Orchestra. It was originally released on two LPs (DG 2530 466 and DG 2530 593) and subsequently issued on CD in 1998. (457 712-2).
In the digital and CD age Kubelik’s Vienna Philharmonic Orchestra recording of the Slavonic Dances has been reissued several times. The most recent being on the Decca Legendary Performances in 2014 (00028946849521). Listening to this version in its entirety reminded me of the flamboyant and exiting recording I first heard back in 1974. His more recent version seems laid back by comparison I will probably stick with this recording in the future.